Of my eleven beds, this year two have potatoes in them. I always grow a few potatoes but concentrate on first or second earlies because maincrop always seem to get blight. I normally grow Kestrel but this year I bought myself some Red Duke of York. I’ve grown them before and was relatively pleased.

However, my daughter wanted to grow some potatoes as well (in potato bags because she doesn’t have a garden at the time) so she selected some more unusual varieties (Shetland Black, Ratte and Belle de Fontenay varieties that I haven’t grown before).

I started picking them the other day on the assumption that the wet weather would mean that they had grown significantly and we would need to eat through them before blight struck (as it always does). So imagine my disappointment when the potatoes were both small and few and far between, particularly as last year I was picking potatoes from late June. I’ll have to leave them a bit longer.

However, I have (re)learned an issue which I knew but didn’t remember and discovered something new that I didn’t know.

The Shetland Black potatoes are virtually impossible to find in the ground. They are the same colour as the soil. I knew this (or at least something similar) as I have grown black or blue potatoes before and its taken years to get rid of the soldiers coming up in the bed. All you need is an odd potato left in the ground and they come up through whatever is in the bed that year – a real nuisance. Ah well, it will at least mean that I’ll have to dig through the bed a few times before deciding what to plant next year. Another problem with the Shetland Blue is that they seemed to be attacked by millipedes (or centipedes with a lot of legs) so they all had to be sorted through when preparing to cook and wouldn’t keep because they were damaged.

On the positive side, Shetland Black are a nice colour (they turn the water blue when cooking) but (the new thing I have learned) they explode into the water when you cook them so you end up with a pile of mush as you can see in these pictures of our dinner last night (Caribbean Fish Stew with our own peas, broadbeans, potatoes [Ratte and Shetland Blue] and swiss chard which was added after the photograph). 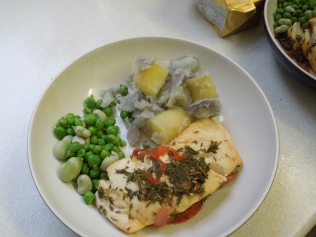 As you can see the Shetland Blue potatoes turned to mush whereas the Ratte held themselves together very well.

Will I grow them again? Probably not, whilst Kestrel are not the best of potatoes, at least you can find them when digging them up.

Growing tomatoes and other vegetables in a greenhouse and at an allotment.
View all posts by PelicanPlants →
This entry was posted in Allotment Blog, Vegetables and tagged broadbeans, peas, potatoes, ratte, red duke of york, shetland black. Bookmark the permalink.
%d bloggers like this: